I’m adding my voice to the horde of online mourners this week. I’ve been meaning to write about Sir Pterry for the last few days, but kept stalling. A nice obituary at Tor has the details so I’ll just talk about my own relationship with his work– and suffice to say, those dang tweets made me cry. (Not to mention, two weeks after losing Leonard Nimoy? I don’t want to talk about it.)

I’ve read about 40 of his books, almost exclusively Discworld, and they have always been a genius blend of hilarious and thought-provoking. You’re laughing, then you’re thinking, and sometimes you’re crying. Like the dog episode of Futurama, you find yourself weeping, “But I thought this was comedy!!” Because that’s life and one of the most fantastical and entertaining set of fantasy books of our generation has always been rooted in real life.

Sir Pterry has a place of honor at the top of my first fantasy bookcase, by the way. 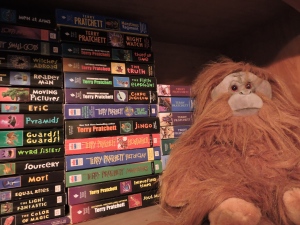 He is even guarded by The Librarian

The first book I read by Pratchett was actually Good Omens, which he co-wrote with Neil Gaiman. I grabbed it on a whim in seventh or eighth grade, during one of my Christmas book binges. (AKA mom said I had x dollars to spend for the holidays, so I ran around a bookstore and picked out x dollars worth of books. They were then wrapped and waiting for me under the tree. Best Christmas??)

This is probably still the funniest book I’ve ever read, though no doubt reading it in my formative years MADE it my model for written comedy, the same way that kids who grew up watching The Simpsons were molded for television comedy in a different way than kids who grew up watching Seinfeld. I love it so much that I had already put it in my baby delivery overnight bag weeks ago, and now I am double glad to take it with me for a few laughs while I’m laboring.

After devouring Good Omens (and foisting it on all of my friends at school, thus creating additional lifelong fans), I returned to the bookstore the next time I had funds. I needed MOAR. First I checked out the Neil Gaiman shelf, but I was perplexed at the fact that his books did not seem to be comedies. Disgruntled, I moved down the aisle to Pratchett and STRUCK GOLD. The next one I picked up was The Last Continent, which was the 22nd book published in that world, and one of the few that relied on a couple threads of continuity from previous books. I had no idea who these people were, and no idea why they were doing what they were doing, but oh man it was still so funny! An orangutan librarian? CLASSIC.

(And, as an addendum, I tried out Neil Gaiman in college and was suddenly aghast that I had passed him over so many years before, so in the end it was ALL GOLD.)

Anyway, I was hooked, and I’ve been picking them up ever since.

So I want to say thank you to Sir Pterry for the many years of entertainment behind us, and the very many years of entertainment in front of us, because there are so many readers who haven’t encountered him yet and will be just as thrilled as 13-year-old Sam when they do. Their eyes will light up when they find a stuffed orangutan in the toy store, and when the holidays roll around they’ll pretend it’s Hogfather coming, because kids our age know there’s no Santa… but maybe we can still have Hogfather?