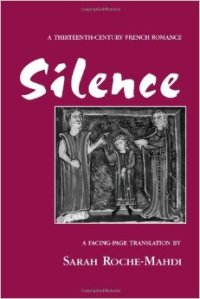 I don’t remember where I heard about this thirteenth century French romance, but I am so glad I finally got around to reading it. It’s an Arthurian tale, though the only classic cast member to appear is Merlin. The thrust of the plot is that the king of England, Evan, decrees that women will no longer be allowed to inherit. A count and countess (whose love story makes up the first third of the work) decide to raise their daughter as a boy so she can inherit their estate.

Hijinks, of course, ensue. The child, named Silence, runs away with minstrels and becomes a famous entertainer. He (and the original French text is very careful to use masculine pronouns for the duration of his life as a man) eventually becomes a valued knight in Evan’s court. Unfortunately, the queen becomes infatuated with Silence, and when Silence rejects her she goes on a vengeful rampage, first accusing him of rape, then sending him off to France to be murdered, then having him sent off on a fool’s quest to capture the wizard Merlin. Hijinks!

What made the story even more entertaining was the narrator’s asides. We get frequent mutterings about how nowadays the nobility is cheap and won’t pay artists what they deserve. There are random digs at the crazy Irish. And Silence’s genderbending story inspires arguments between the allegorical figures of Nature and Nurture, who fight to determine whether the child will be Silentius or Silentia. Oh, and because this is a medieval romance, everybody has the Most Emotional Emotions Ever to Emote! People fainting left and right, unnecessarily elongated lovers’ misunderstandings, it’s all gold.

It’s a quick read and well worth a look. Here are some gems from the translation by Sarah Roche-Mahdi.

After hearing arguments from both Nature and Nurture, Silence decides to continue life as a man:

Then he began to consider
the pastimes of a woman’s chamber–
which he had often heard about–
and weighed in his heart of hearts
all female customs against his current way of life,
and saw, in short, that a man’s life
was much better than that of a woman.
“Indeed,” he said, “it would be too bad
to step down when I’m on top.
If I’m on top, why should I step down?”

The count and countess find out that Silence has disappeared with the minstrels, and are… extremely distraught:

their hearts were filled with such anguish
that no one could possibly describe it;
no, not even one one-hundredth of it.
Their hearts were nearly breaking;
they were very close to death.
They kept on fainting and being revived,
and the nobles who came to their assistance
were scarcely able to keep from fainting themselves.
…
But these people did not dare mourn openly
for fear of killing the countess,
who was barely breathing,
and the count, who was suffering terribly,
because the slightest bit of noise
might have killed them both.

There’s much more fainting where that came from. Check it out!

Sign up for Sam’s newsletter and get a free flash fiction story!

MONSTER CAKE POPS
Cherno having a nice lil nap
The children have discovered volcanoes XD
I appear to be covered in cats
My panther on the prowl
A very smug boy who has just won a cat battle royale for control of the blanket
Loading Comments...
Comment
×
%d bloggers like this: