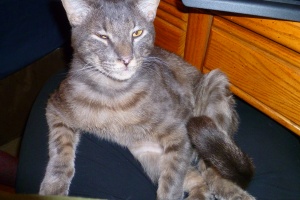 The Professor in repose.

My cat temporarily lost his mind the other night.

I sleep beneath our bedroom window because I cannot live without a cool breeze. Our cats take turns sitting on the windowsill and lounging around open surfaces on the bed. They are generally quiet and mellow and it rarely disrupts me to have a cat climb past my head to reach the sill.

So it was quite to my surprise when, about half an hour after I’d fallen asleep, Professor Stormfury went absolutely batshit attacking the open window! He scrambled up a stack of diapers and wipes next to the bed, knocking stuff all over, and then fought madly to fit on the windowsill. I tried to push him away, still half-asleep, and he only jumped back more frantically, whining and knocking loudly against any surface he could gain traction on.

I leapt up (if you wake up that baby I will stuff you and put you on a mantle!!) to set him on the ground and end his off-balance scrabbling, but he only fought me harder. As soon as I set him down he would run back up and collide head first with the window. I found myself wrestling a muscular 17-pound cat and losing. He fixed his claws in the screen and pulled it loose from the frame, so now I was not only trying to keep him quiet, I was trying to keep him from flying out the window and down a hill to the street.

I finally worked his claws loose of the screen and shut him out of the bedroom entirely. I went back to bed, a bit dazed, and had some trouble falling asleep. Unfortunately, being half-asleep gave my imagination license to run wild with the incident and I promptly blew it out of proportion. I wondered, what did Stormy see that agitated him so much? The screen flapped loosely in the breeze, a taunting black hole, and it could have been anything. A neighbor walking by, a serial killer scoping out apartments, a minion of the elder gods, anything.

I know I keep the window open. I know that anybody can slice through a screen without making any sound. But it turns out there is a distinct psychological difference between a screen and nothing. A small hole? Well clearly somebody is going to reach through it and grab my face (the absolute worst case scenario here). But a mesh screen? Well that is an impenetrable physical and social barrier. Nothing can get to me through a screen. It’s closed!

The next day the cat was perfectly normal and I fixed the window without a hitch, so it looks like I’ll never know what was lurking on the hill that night.