I’m almost a week late posting this blog because directly after Thanksgiving I fell into a pit of baby-won’t-stay-asleep. After several nights of zombie-walking through the wee hours I entered a state of semi-consciousness which is difficult to describe. I could see sound? My limbs were no longer connected to my nervous system? My husband tried to roll over in bed and I shoved him away because I was convinced he was about to lay down on knives and screwdrivers?

Anyway, things are improving, and you aren’t here for baby woes, you’re here for THANKVENGERS! The holiday was a blast, even though we were a couple siblings short this year. Everybody dressed up, I got to put my new kitchen to the test, and the decorations… well, I’ll let the decorations speak for themselves!

Even the beverage station got in on things, and while we didn’t finish off the drink stand (I think somebody would have died), we were certainly feeling toasty by the time dessert rolled around.

We ended up expanding the theme past the MCU. For one thing, Wolverine showed up (um, he did a comic run with the team!). For another, Daredevil and Kingpin made appearances (though they WERE the MCU versions). There would have been even more chaos if all the family kids made it, but my family doesn’t need a lot of children around to act like them. 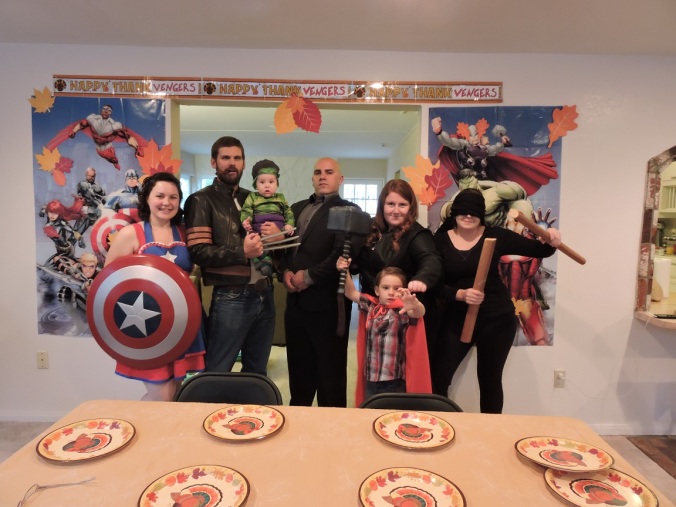 We need a theme song.

There are plenty of photos of individual battles, food being chopped by adamantium claws or smashed by Mjolnir, and my baby being the adorable Hulk, but I think you’ve got the idea.

I’m basically a fool for ever expecting to accomplish personal goals during the last quarter of the year. The holidays consume me. In January I will emerge from the ashes, phoenix-like, to read all of my holiday books and write up a storm.

At the end of the day, I have a new family photo to plaster everywhere worth plastering: