The All-Star Game is behind us. Pride is behind us. Now San Diego will spend the next few days transforming into the marvelously bloated, shamelessly commercial, media conglomerate shilling magnificence that is SDCC. There will be hundreds of things to do downtown around the con (I use the calendar at SDCC Unofficial Blog), and then of course there’s the convention itself.

In honor of SDCC this week, here are some happy con memories!

Ahh the first time I went in 2005 you could stroll up to buy tickets day of, and the line looked like this:

Oh dear how will we ever get inside

The highlight of the day? Not my own gross greenish-yellow highlights, that’s for sure. Nope, it was A FRIGGIN AWESOME ALIEN STATUE!

Get a haircut, Sam 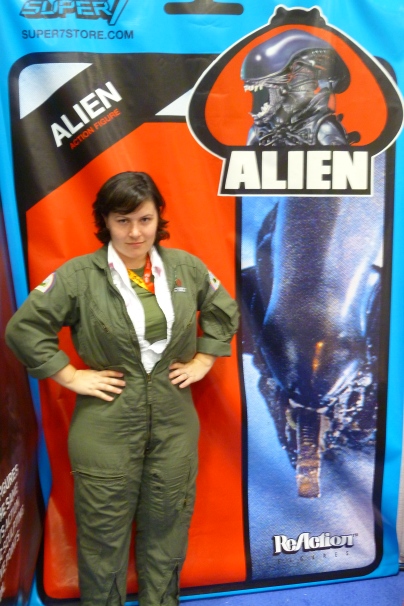 I am the coolest person you know

I can’t fail to mention that we also debuted our group Jurassic Park that year!

2012 was also the year that I passed out in a makeup booth, rock! I was getting some free zombie makeup from a Walking Dead artist, and ooops I hadn’t eaten yet and the combination of large cover-up gown and all my face pores being filled in made me overheat and black out. My husband talked the paramedics out of making me leave, I ate some trail mix, and then it was BACK ONTO THE EXHIBIT FLOOR, YEAH!

In 2013 we camped out for Hall H for the first time, since we’d barely got in showing up before 6am the year before. We ended up on a stretch of sidewalk in front of a gaping terror hole that opened into a hedge maze. An employee kindly came by to block it off for us…by stretching a useless bit of strap across the front.

But sitting in Hall H all day was totally worth it. And lest you think I skipped a year of Alien-mania, feast your eyes on this sweet gem I commissioned from Noelle Stevenson:

That was also the year we got to watch The Matrix as a flashback feature at the nearest theater, and we had a dance party when we realized we were the only people there. 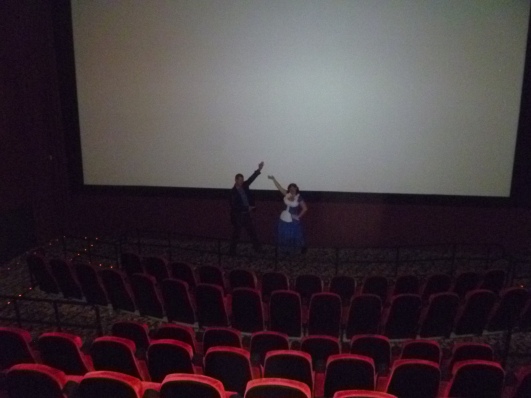 Before you ask, that’s a Ninth Doctor and a Tardis dress

In 2014 we camped again and had a hilarious night of free leftover pizza and concert popcorn; a homeless woman who took our popcorn and complained we didn’t also have meat; and a less-than-comfy final camping ground full of tree roots. It was the year of Boxtrolls and rocket boners and Nick Cage pillow.

We also did our largest group cosplay yet: Wild West Mario.

Last year was SDCC-lite because I had an infant at home, but this year! THIS YEAR! This year, I still have a young child, so I’m not doing the Wednesday night through Sunday afternoon hell marathon that we did in the early years. I’ll power around the hall and surrounding entertainment on Thursday, then camp out Friday night for a return to the mania of Hall H Saturday. Because! You guys! Aliens!