Another year down and I am beat! For baby juggling reasons I did two main days at the con: Thursday was dedicated to the exhibit hall and surrounding attractions and Saturday was big time panel day.

On exhibit hall days we always buy some comics (usually including a Judge Dredd or Hellboy collection) and some art (always including a roll-a-sketch masterpiece by David Malki). And of course, scope out the swag and the cosplay. I took the cosplay easy this year and wore my Nostromo uniform because DUH Aliens 30th anniversary! 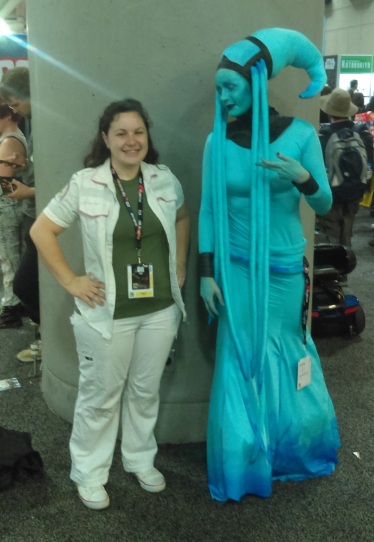 Not all aliens are bad. 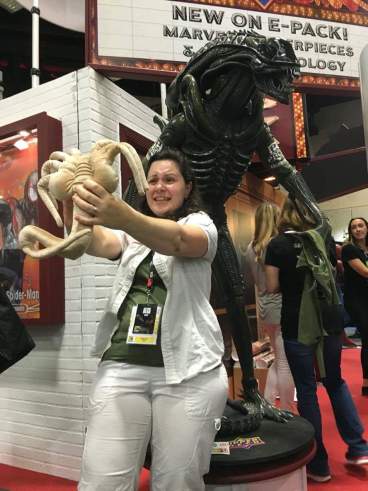 Yes I brought my own facehugger. 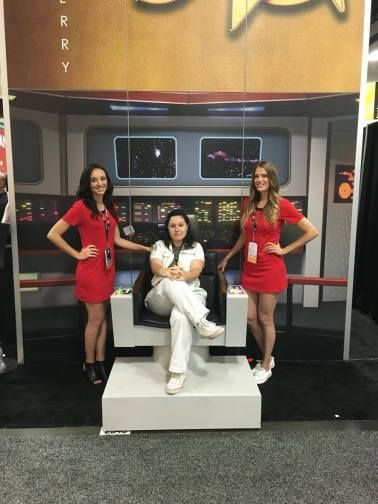 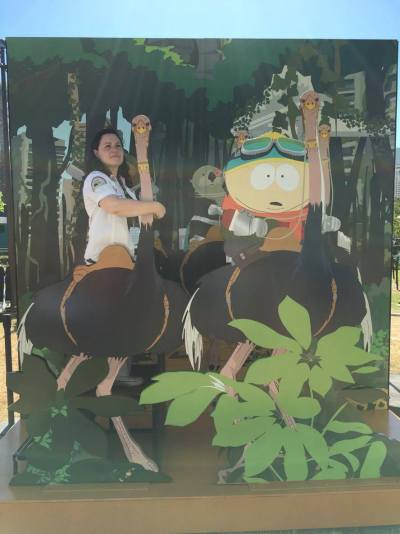 And finally, a Nichelle Nichols signing!! 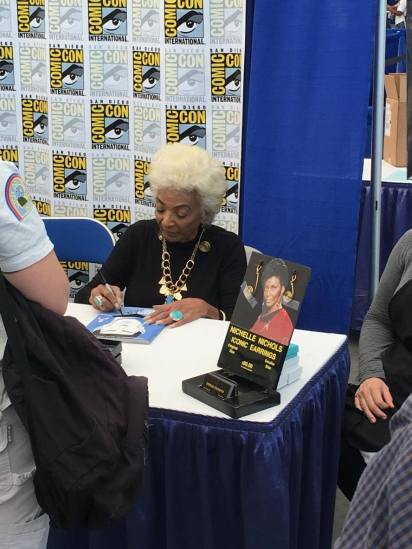 If only it didn’t cost $50 to get an actual photo.

We also popped into the Geek & Sundry panel because I love me some Felicia Day web shows and her adorable brother Ryon was there.

Then came…the ridiculous overnight slog that is Saturday in Hall H. Skip down to pictures if you don’t care about the details, because I am about to lay out the details.

Hall H is the big time. It is a massive room that seats 6500 people, which means line management is an ISSUE–especially since way more people than that attempt to get in for the big studio extravaganza that usually descends on Saturday.

And that means camping! SDCC hands out wristbands for the first Hall H panel each day, so if you get a wristband you know you’re guaranteed entry first thing in the morning–and if you don’t get a wristband you can gauge whether it’s worth waiting for the chance enough people leave throughout the day to get you in.

Every year they fix some issues from the previous year, and every year the mob finds a new way to cause problems. 2016 will go down as the infamous Year of the Parking Lot People. The Next Day Line started earlier than ever: something like 6 a.m. on Friday. It snaked around behind the convention center, and like always, at some point it got far enough that staff had to place a gap in the line and continue it in the park on the nearby Embarcadero Marina (hereinafter the Island), to avoid having people dangerously clog up the street in between.

Well SOMETHING went terribly wrong in the middle. At some point Friday morning (and whether it was a misunderstanding or deliberate is a Fight For the Ages), a gentleman saw the first chunk of the line end next to the Joe’s Crab Shack parking lot, decided that was where the line was continuing, and went on in. Other people naturally followed. The official line continued to grow on the Island, and the unofficial line continued to grow in the Parking Lot. Maybe a couple hundred people set up an umbrella shanty town and spent all day boiling to death on the asphalt.

It all came to a head around 10pm. SDCC staff had started handing out wristbands at 9. They reached the Parking Lot and all hell broke loose. For a couple hours people had been streaming into the lot to take advantage of the empty space and cram into the line (cutting ahead of the entire Island). Since it wasn’t a planned part of the line, there were no line markers and as soon as everyone stood up they blended into a solid mob.

The first solution was to skip the parking lot entirely, since it technically wasn’t part of the line, but that almost started a riot, since there had been dozens of people braving heat stroke all day genuinely thinking they were in the right place. BUT there was also no way to distinguish between the people who’d been there all day and the people who had snuck in late, so after more than an hour of arguing they decided to just give everybody wristbands. Which naturally almost caused a riot of Island People because every line cutter who got a wristband in the Parking Lot meant one more person on the Island missing out after spending anywhere from 4-12 hours in line already.

Aaaanyway. We were sitting pretty in the shade on the Island, watching it all unfold via Twitter and nervously waiting to find out if we’d get cut out, or if the entire thing would devolve into a Hunger Games battle. There had to be well over a thousand people who cut the line successfully, because earlier in the evening a staffer assured us we were in the second section of the line (wristband B), and we ended up in the last section (wristband D). Disastrous for the folks behind us.

My friends had reached the line at 4pm. I put the baby to bed at 8pm (my brother valiantly spent the night and babysat the next day) and rushed downtown to join them. Due to the parking lot fiasco, we didn’t get our D bands till after 1am. We ran to move my car (in a parking lot that closed at 2am), then settled down in our designated camping spot: an unpleasant stretch of sidewalk against the park bathrooms. Woohoo!

After a few groggy hours dozing we woke up around dawn to the tune of the bathroom cleaning crews blasting mariachi music. By 7am SDCC staff got everybody up and condensed the line, then ordered us to stay put (no putting away sleeping gear! no fetching breakfast! no bathroom!), because we would start going inside very soon. 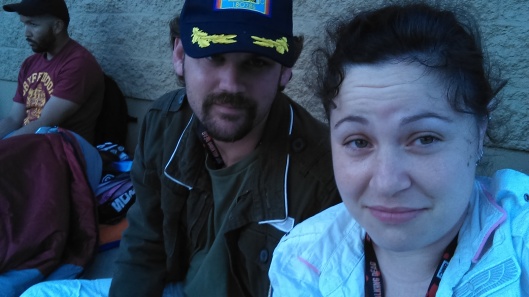 Ha! Programming didn’t start till 11:30. They finally started pouring people in after 10. Everybody grabbed seats and then formed giant lines at the internal bathrooms and concession stand. I finally got some coffee. The ordeal was over.

Despite the night’s chaos, it was a good day in the Hall. WB’s panel was two and a half hours long and they ran through a lot of upcoming releases (though lately, irritatingly, they do a lot of “show a new trailer, trot out the actors for five seconds, then zoom on to the next thing”). I am tentatively excited for Wonder Woman, Aquaman, and Kong Skull Island. I’m even more tentatively interested in Guy Ritchie’s King Arthur movie. And while I still think Eddie Redmayne is a lizard man, during the Fantastic Beasts section they gave everybody magic wands SO HE’S SLIGHTLY FORGIVEN FOR JUPITER ASCENDING. 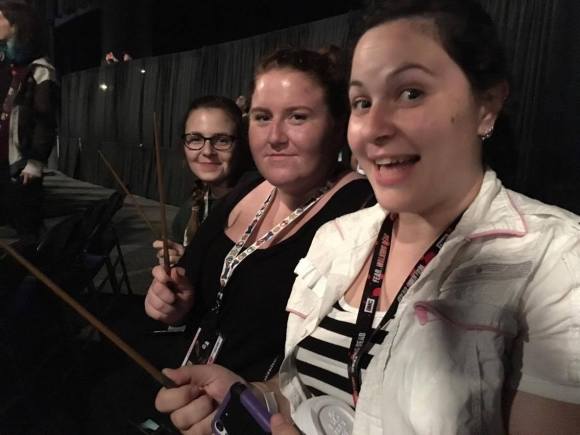 I changed out of my OD green undershirt. Sue me. You wouldn’t have wanted to smell it.

I’m excited about the new Star Trek Discovery show coming in January after hearing Bryan Fuller talk about the spirit of the original series: portraying a better, more progressive and diverse future. The spirit of teamwork and inclusiveness is what I love about TOS, so I’m hoping the new show takes it even farther. Don’t let me down!

Um, and then it was the Aliens reunion panel! And of course I loved it! And there were plenty of great cast anecdotes! And plenty of Sigourney! Even Newt showed up, and she’s a fourth grade schoolteacher now. 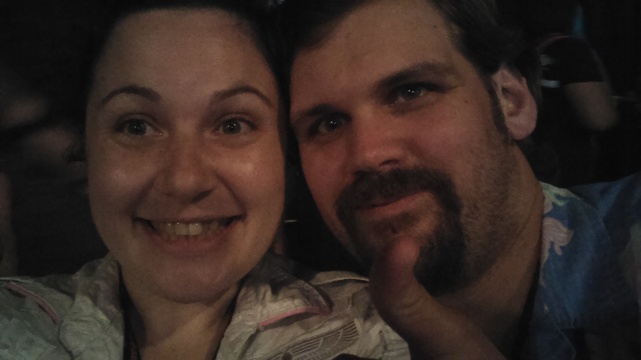 Um, and then the Kickass Women panel, which I always love! I would listen to Lucy Lawless tell funny jokes and touching anecdotes all day!! Plus Tatiana Maslaney! Morena Baccarin! Connie Nielsen! And more! I was only moderately interested in Wonder Woman till I found out it might be chock full of mommy-daughter feels and now I am suckered in.

And that was my SDCC. The rest of my crew stayed on for the Marvel panel and thoroughly enjoyed it, but I had a baby losing patience at home so I had to bail. My husband and I were absolutely wiped out by the camping fiasco, so we carried on the spirit of SDCC weekend by power watching most of Ash vs. Evil Dead on Sunday. I’m not sure what I want to do next year. I love the con, and managed to get into what I wanted, but only through outrageous levels of planning and camping.

But these days, that’s SDCC!