Have I told you this story before? I probably have. Even if you’ve never met me, I probably found some way to bend time and space and relate this anecdote about how I wrote my first short story. Because everybody wants a cool origin story, and this one doesn’t involve dead parents or women in fridges.

In an infamous incident that my older sister (likely to her regret) will never be allowed to forget, a head injury was caused which would symbolically shape my life.

It was a fine March day when I was 7 years old. At the time there were only 3 children in what would become my brood of siblings, and all three of us were playing outside in a small kiddie pool full of water. Also it was Southern California, which means March is plenty warm enough to start playing in pools again (sorry, places who have “seasons”!).

Do you remember Squeeze-Its? I think they’re called Kool-Aid Bursts now, but I don’t know a single child who drinks them anymore. They were liquid sugar for kids, available in thin plastic bottles with small holes at the top. You know. So you could squeeze them when you drank.

Well, my brother and I were allegedly filling old Squeeze-It bottles with water and then squirting them at our older sister, and allegedly laughing and refusing to stop despite her repeated and increasingly angry demands that we desist. And then maybe, it’s possible, we took our torment too far and in a fit of pique she decided to scare us off by threatening to throw a rock. And then maybe we still wouldn’t stop, and she threw it, but she didn’t know her own strength and instead of landing menacingly at my feet the rock hit me in the head.

After being declared non-life-threatening by the paramedics, I was driven off to an emergency room to await stitches. I don’t know how long we actually waited, but in child time it was definitely months. Months of sitting in a hard chair with my mom pressing some cloth to my head. X-rays that had to be conducted twice because the first time I was wearing a hair tie with a metal piece and it looked like metal was embedded in my head. And then! I finally went in! And the doctor gave me six bright blue stitches along my hairline while I was staring right at him!

It was the most exciting and traumatizing adventure of my young life. On the one hand, it was the beginning of a lifelong fear of needles. And on the other hand, it was an Interesting Story. The average 7 year old has nothing interesting to say. Trust me, I’m a former babysitter! It’s not their fault. They’ve got no stories yet. But now I had an exciting tale to babble to anyone who would listen. And on top of that…I was a first grader! I knew how to write! I COULD PRESERVE IT FOR ALL TIME.

And thus I wrote my first autobiographical short. And it was so exhilarating, I wrote more stories. And more. I still have a stack of construction paper stories Written and Illustrated by Sammy that I will share with the blog some time because they are works of art. I’ll even heartily acknowledge: it’s possible this wasn’t the first story and childhood memory fails me. But it’s the first in my mind, and in my mind I was hit in the head with a rock and that knocked something creative loose, so I’m a writer because of a childhood head injury.

I didn’t even mention the final injustice. That rock was my special rock with one big flat side, upon which I had crappily painted a hideous landscape scene! AND MOM TOOK THE ROCK AWAY!

Without further ado, since this is the version I know you’d all really prefer to read, I present: WHAT HAPEND MARCH NINTH!! 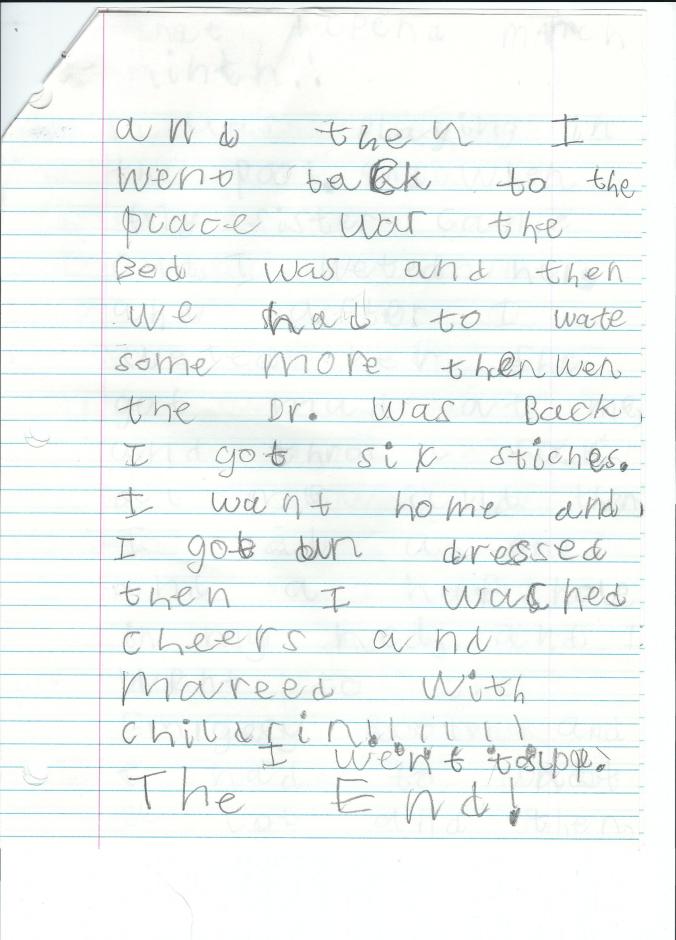 I was playing in the pool, and when my sister came out I wetted her, and after I wetted her she got mad at me, and then threw a rock at me and then, I had a one and a half [inch] hole in my head, and I went to the Emergency Room and I had to wait a lot and then, they made sure that it was not too too bad, and it was not too too bad. I went to the place that I got the x-rays. I got two x-rays and then when they were ready to take the last one they noticed that I had something in my hair that had a metal piece on it so they had to do it all over again, and then I went back to the place where the bed was and then we had to wait some more then when the doctor was back I got six stitches. I went home and I got undressed then I watched Cheers and Married With Children!!!!!! I went to sleep! The End!

Truly, the beginning of a legend.