Well, I thought I was going to wait longer than this, but after two months with only a single cat in the house, I began to get…. the itch. We have been lavishing attention on our 11yo tabby cat, Professor Stormfury, but he can only sit in one lap at a time!

And I haven’t had kittens in over 18 years. The last kitten was Hades, in fact, when I was in high school.

And, you see, it’s kitten season.

And somebody found a litter behind a fast food place and brought them in to the Humane Society.

And I’ve loved every garbage can cat I have ever known.

Meet Chernobog and Belobog (Cherno and Belo for short)

Stormy is being surprisingly tolerant. After a couple days of growling and running away (he is a 20 pound wimp), he now sits in long-suffering silence and tries to ignore the interlopers.

The interlopers, meanwhile, have made themselves right at home.

Our household is now four humans, three cats. A right and noble proportion! :’)

My elderly cat passed away this week. He didn’t have any illness we could treat. He’d just begun to rapidly unwind after a few years of gradually slowing down, and I couldn’t put off the decision any longer. It’s been a sad week for my entire household, and it’s going to be a long time before I stop looking for him out of the corner of my eye. I wrote up a little thing on Twitter, which I’m now posting here.

Hades, Lord of the Underworld, was a garbage kitten found by my dad at a construction site with his sister (long departed), when I was 16. They were so tiny they still had to be bottle fed. My mom agreed to nurse them during the day, and I nursed them at night. For weeeeks. 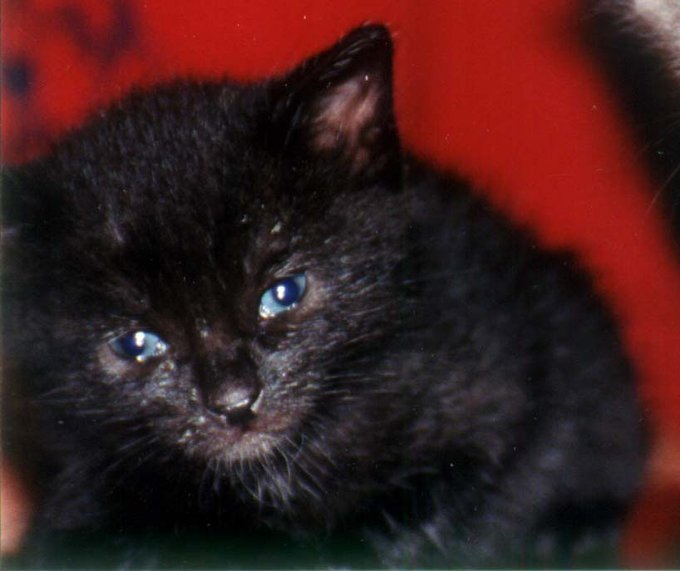 My sister took care of him while I was at college, but as soon as I got back he glommed back onto me. He’s a belly-rub-loving shoulder-goblin with no shame and a squinty pirate eye acquired in a possum fight. His best friend is a 20lb tabby cat slob named Professor Stormfury. 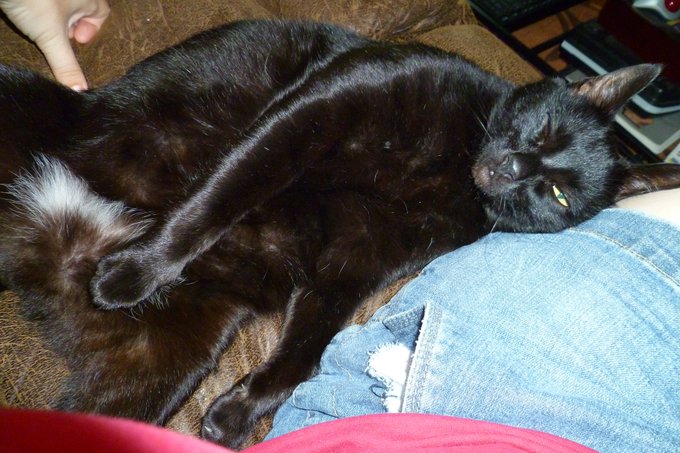 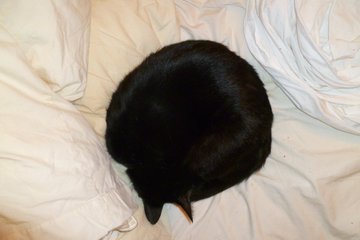 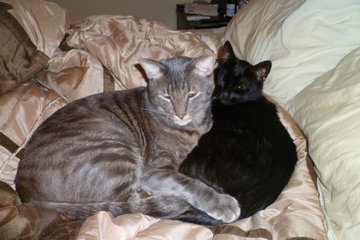 He’s been with me for over 18 years, six homes, a marriage, two children, thousands of nights sleeping at my side (or practically on my face), and I am going to miss him. He is the greatest void that ever took cat form and stalked the kitchens of the land, begging for treats. 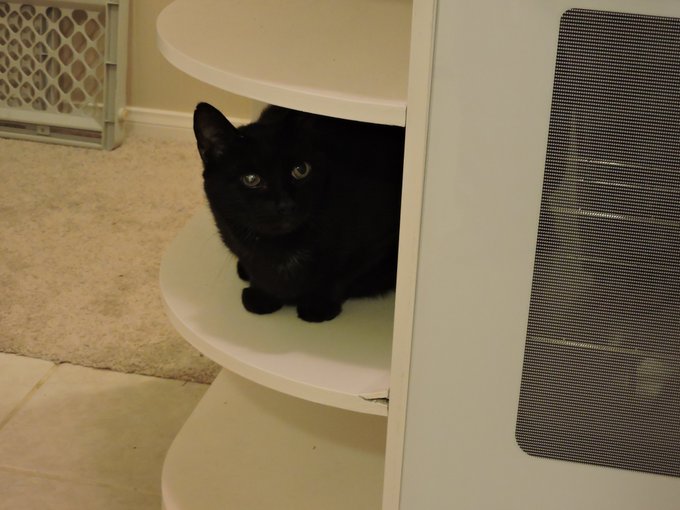 The first of the head-to-head 2016 political debates is on tomorrow night. I have Strong Opinions. I’m going to watch it and be filled with aggravation. So I am preemptively assembling some cat pictures to post instead of a political rant. Also I’m being lazy, since I finally hit my stride on the mecha warrior book and dashed out a good 5,000 words this weekend.

So pay attention to the news, and then hug your cats for comfort, and then vote.

When political commentary is leaving you cold, so you’ve got to snuggle anything in sight:

When all you want is to mooch a baby’s lunch and you accidentally form a 90s alt rock band instead:

When you forget how to cat and need refresher training:

When there’s a toddler after you all the time, and you try to go undercover as a toy, but it never works:

And finally, when your brother rescues the cutest kitten in the world, so you hide it among all the toys and hope nobody notices. He’s yours now, YOURS!

The Professor in repose.

My cat temporarily lost his mind the other night.

I sleep beneath our bedroom window because I cannot live without a cool breeze. Our cats take turns sitting on the windowsill and lounging around open surfaces on the bed. They are generally quiet and mellow and it rarely disrupts me to have a cat climb past my head to reach the sill.

So it was quite to my surprise when, about half an hour after I’d fallen asleep, Professor Stormfury went absolutely batshit attacking the open window! He scrambled up a stack of diapers and wipes next to the bed, knocking stuff all over, and then fought madly to fit on the windowsill. I tried to push him away, still half-asleep, and he only jumped back more frantically, whining and knocking loudly against any surface he could gain traction on.

I leapt up (if you wake up that baby I will stuff you and put you on a mantle!!) to set him on the ground and end his off-balance scrabbling, but he only fought me harder. As soon as I set him down he would run back up and collide head first with the window. I found myself wrestling a muscular 17-pound cat and losing. He fixed his claws in the screen and pulled it loose from the frame, so now I was not only trying to keep him quiet, I was trying to keep him from flying out the window and down a hill to the street.

I finally worked his claws loose of the screen and shut him out of the bedroom entirely. I went back to bed, a bit dazed, and had some trouble falling asleep. Unfortunately, being half-asleep gave my imagination license to run wild with the incident and I promptly blew it out of proportion. I wondered, what did Stormy see that agitated him so much? The screen flapped loosely in the breeze, a taunting black hole, and it could have been anything. A neighbor walking by, a serial killer scoping out apartments, a minion of the elder gods, anything.

I know I keep the window open. I know that anybody can slice through a screen without making any sound. But it turns out there is a distinct psychological difference between a screen and nothing. A small hole? Well clearly somebody is going to reach through it and grab my face (the absolute worst case scenario here). But a mesh screen? Well that is an impenetrable physical and social barrier. Nothing can get to me through a screen. It’s closed!

The next day the cat was perfectly normal and I fixed the window without a hitch, so it looks like I’ll never know what was lurking on the hill that night.

I drafted a couple of blog posts and wasn’t satisfied. Mostly I am fatigued and weighted down by impending baby, so I’m going to go read a book instead of writing. Enjoy these kittygrams instead!

Hades, mocking the way I sit down every day now

And Stormy coordinating nicely with my body pillow

And now, the other one.

Professor Stormfury (aka Stormy cat), nearly age 6, was named for the 1960s weather experiment, Project Stormfury. Go look it up, it’s amazing. And it was a name that has not gone to waste.

But you do not simply walk into the Humane Society and walk out empty-handed. I had my eye on this pair of exceedingly affectionate, exceedingly fat, exceedingly old black cats who had been spoiled rotten by the old woman who owned them before her death. But we weren’t prepared to take two more cats, and anyway it was Randy’s choice.

He fell in love with a massive gray tabby. By massive I don’t mean fat. This cat is LONG. Hades is a respectable 9 pounds, and this boy is 17. He was two years old at the time, a big goofy baby who did not realize how big he was and therefore frequently failed to stick his landings when he attempted to jump on or off various surfaces. Seriously he is the worst at being a cat, he just slides off the side of things.

The poor thing contracted a sinus infection at the shelter, so we had to quarantine him for weeks in our bathroom, force-feeding him medicine and water because he was too stressed/lacking-sense-of-smell to want to eat or drink. We thought he was going to hate us.

But no, he has turned into the biggest, most lovable goofball of all. The folks at the shelter warned us he might be shy. HAH! Hades will grumble and hide when people he isn’t familiar with come to visit (literally he grumbles, I can hear him bitching when he walks away), but Stormy will run up to ANYONE for pets, and get himself so wound up he’ll pass out in the middle of the room trying to stay in the center of attention.

And if you don’t quite fathom how big he is, let me illustrate the difference between a 9 pound cat (considered on the “large cat” scale of cat measurement) and a 17 pound cat:

Keep me away from the Humane Society or I will go home with all of them.

Hades (aka Bad Boy), ruler of the Underworld, is about 13 years old. When I was in high school my dad found a pair of kittens wandering on their own, could not find a mommy cat, and finally took them home. Hades and Athena:

How could you NOT pick up these fluffballs??

This is how we acquired a lot of our cats. In this case, Hades and Athena were so teeny they still had to be fed via kitty bottle every couple of hours. The deal to keep them was: Mom would take care of them while we were in school, and the kids had to take care of them the rest of the time. The result: my brother and sister sleeping through every alarm, and me waking up every two or three hours to bottle feed crying kittens. -____- (Never forget!!)

Athena bonded with my older sister, but Hades is my boy. I left him home while I was away for college, and then he lived with my older sister for an additional year while I lived with an allergic boyfriend, but as soon as I was able to take him he was once again MINE. Following me around the apartment, sleeping with me, sitting on my lap at every opportunity. It was so nice to have a cat again!

He had been an indoor-outdoor cat for a few years, but his outdoor days ended around age nine when he got in a fight that scarred his eye and cut up his chest. Opossum perhaps? The evil red-eyed monsters had invaded our neighborhood at the time.

SIDE STORY: Haha that one winter we dug out our Christmas wreaths from the shed and discovered that a opossum had curled into one of them, died, and mummified. If I ever find that photo I will post it. With minimal context probably.

Anyway, Hades is now a pirate. It kind of fits the black cat aesthetic.

He has taken to indoor life exceedingly well. Every year he is slightly tubbier, and slightly less dignified. He stands up for treats. He grooms my head when I’m trying to sleep. He has to have food in his bowl by 9 p.m. OR SO HELP ME HE WILL SHRED EVERY WALL IN THIS HOUSE. His days of hunting hummingbirds and bringing our neighbor’s baby bunny through the second story bedroom window are over, but retirement is nice.

Ladies and gentlemen, the Ruler of the Underworld

I can’t imagine ever not having cats again. Next up I’ll introduce…. THE OTHER ONE.

Sign up for Sam’s newsletter and get a free flash fiction story!

MONSTER CAKE POPS
Cherno having a nice lil nap
The children have discovered volcanoes XD
I appear to be covered in cats
My panther on the prowl
A very smug boy who has just won a cat battle royale for control of the blanket
Loading Comments...
Comment
×